The Australian Boomers basketball team changed hotels after an explosive all-in brawl against the Philippines overnight – after fears arose for their physical safety in the aftermath the internationally reported punch-on.

With four minutes remaining in the third quarter, players and officials from both sides let loose in a flurry of punches and kicks – with fans even flooding the court for the good old fashioned barny.

The Boomers were headed to a convincing victory with a 79-48 lead before the match descended into farce after Philippines guard Roger Ray Pogoy lashed out at Australia’s Chris Goulding with an errant elbow.

It is believed the Filipino side had been advised to defend their country’s honour against the cocky Australians, after the embarrassing defeat of their boxing champ Manny Pacquaio – by Australian Jeff Horn in The Battle Of Brisbane, which took place exactly a year ago.

Boomer Daniel Kickert’s retaliation on Pogoy sparked an all-in brawl which Fox Sports commentator Matt Russell described as “sickening”, and which included punches, elbows, kicks and objects — including a chair — hurled at players.

Basketball Australia CEO Anthony Moore described the shocking scenes at Philippine Arena in the FIBA World Cup qualifying match – where coward punches, kicks and chairs were thrown in wild scenes – as the proud people of the Philippines attemp to avenge their defeated champion, Manny Pacquiao.

“Jeez. Don’t take it out on us” wrote Moore, on Twitter. 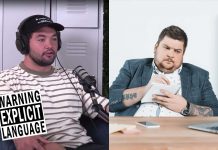 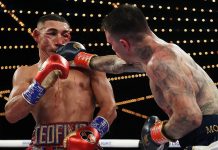