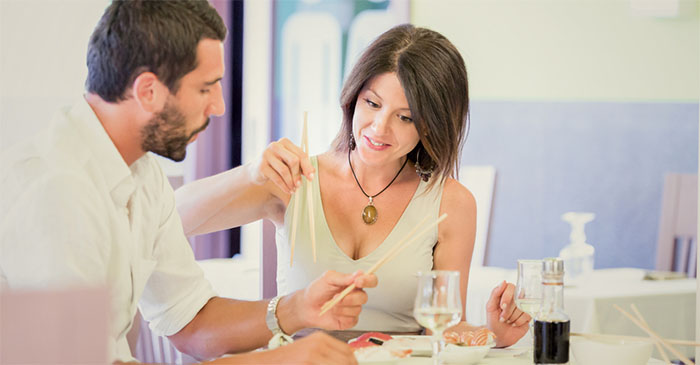 It was a small step for Marshall Bradey to agree to dine at his now local Chinese restaurant, but it was a giant leap to expect him to use a pair of chopsticks.

The unrefined 29-year-old plumber was lured to his cultural doom by Sally Callaghan, his current casual partner who’s looking to make what they have a little bit more serious by taking him out of his culinary comfort zone.

Arriving at the locally-famous Ellen’s Oriental Bistro in Wickham street, Marshall was under the impression that this Aussie-style Chinese would have a knife, fork and spoon for the uninitiated diner – but this eatery was a lot more traditional than Bradley thought.

“This is the type of Chinese food stop that has a Lazy Susan on every table. For Christ’s sake, they even have Crown Lager on the top shelf of the fridge,” explained Mr Bradey.

“But for some reason, they didn’t have any Australian cutlery. What do they expect? That everybody in this windswept brothel town know how to use chopsticks? Next thing you know, they’ll be asking you to order in Mandarin!”

“But yeah, nah. I gave it a go because Sal was nice enough to drive, because she knows how much I love to crush a gold straps over dinner.” he said.

Eventually, after a few finger-friendly entrees and Crownies, Marshall’s primary teacher missus tried to teach him how to use chopsticks – but ultimately failed.

“Look, he’s a nice enough bloke. There’s not too many half-way decent blokes in this town – especially ones that have a good job and rough hands,” explained Ms Callaghan.

“To his defense, he really did give it a red hot crack, but he was a bit too pissed to master the fine motor skills needed for chopsticks,”

“So he just had seven more Crownies until he wasn’t embarrassed to eat dinner with his hands. I just stared out the window and wished I’d never left Ascot the whole night.” she said.