Local man John Kerr had been enjoying a casual afternoon stroll around his neighbourhood when he was hit with a pain in his right knee.

The twenty-five year was shocked by the sudden stabbing sensation, as he couldn’t quite pinpoint the cause of it.

“I thought things only started hurting after an injury,” said John.

“It’s not like I twisted it in my sleep or tore something at the gym.”

“It just came out of bloody nowhere.”

Unbeknownst to John, his descent into adulthood began with a willing trip to Pillow Talk, followed by the accumulation of Tupperware containers and different sized non-stick pans.

According to a local Orthopedic surgeon, Dr. Roy, knee pain is normal and should be expected around the time you start meal prepping for fun.

“We’re not sure why this happens,” says Dr. Roy.

“That, and random chest pain seems to be pretty common.”

“Oh, and waking up with a sore neck. See that a lot too.”

On top of never being able to see his friends due to conflicting schedules, and coming to the realisation that his degree has done eff all, John says this knee problem is the final straw.

“Being an adult is pretty shit”, moans John, mindlessly scrolling on his phone.

“I’m tired all the time and everything makes me mad.”

“And I’m starting not to understand memes. I don’t know who half these people are. What’s a Tik Tok!?”

In a fit of rage, John yeets his phone across the room and attempts to curl up into a fetal position but can’t because his knee still hurts. 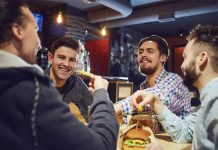