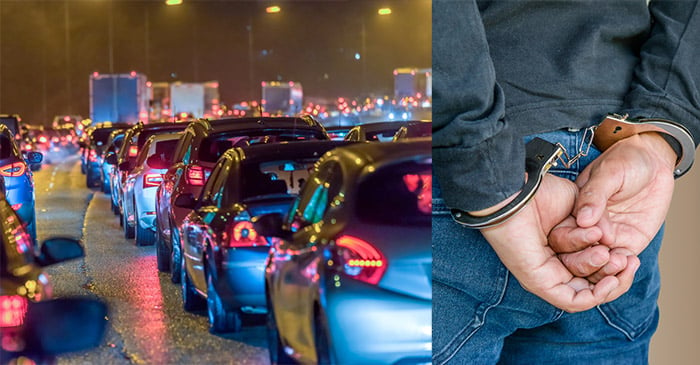 A Betoota Heights man was arrested last night around 7 pm after police discovered that his car had broken down on the A34 onramp at the intersection of Collins Road in the Old City District – causing town-wide traffic chaos.

Traffic was backed back to the start of the A21 in Betoota Ponds, some seven kilometres from where the incident took place.

The man, named in court documents as Dale James Coleman, is now facing a number of serious terrorism-related charges after detectives ascertained that his vehicle was the sole cause of the disaster.

The 34-year-old was arrested by mounted police after a short foot pursuit close to where his vehicle was discovered.

Speaking to the media this morning, a Queensland Police spokesman said this was the first time anybody had been charged with such an offence in the Diamantina Shire.

“These are very serious charges and detectives from the major crimes squad are currently en route to Betoota to question the man,” they said.

“Police will allege that Dale James Coleman went to drive down the onramp to the A34 at approximately 6:40 pm last night in his 2001 Land Rover Discovery. Shortly after he turned onto the onramp, he noticed that both the oil pressure was low and the temperature was high. Rather than pull onto the breakdown lane, he continued to flog the disco until it couldn’t be flogged anymore,”

“He had ignored the fact that the vehicle had a blown head gasket for close to a week when the engine finally seized, causing the traffic chaos we saw,”

“His actions inconvenienced thousands and his blase attitude towards the well-being of other motorists is undiluted terrorism in the eyes of the law. That will be all for now.”

Coleman is due to face court later this month.