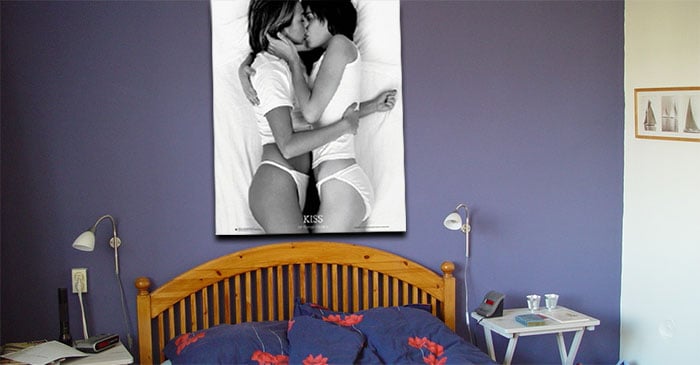 When leasing agent Lisa Ackorn found herself stumbling into Kevin Foster’s bedroom early on Saturday morning, she knew she’d made a serious error in judgement.

“If I knew he had a poster of those t.A.t.U girls pashing on his wall, I probably wouldn’t have got in the cab,” she said. “That and the picture of a Lamborghini Countach that’d obviously been ripped out of a magazine stuck on the inside of the toilet door. My brother did that when he was 15.”

Ms Ackorn spoke to The Advocate this morning and explained that it’s not the first time she’s ended up in a 30-something’s den only to find something mildly childish or downright inappropriate stuck to the wall.

The 29-year-old South Betootanese Gemini stated categorically for the record that when she was courting The Advocate‘s editor, Clancy Overell, he had a picture of him and then girlfriend Kerri-Anne Wesser with a dolphin they’d shot during a fishing holiday to Port Douglas in 1999.

“That was back in 2009. Clancy had a 10-year-old picture of him and a topless Kerri-Anne with a gut-shot dolphin on his bedside table. I almost fainted, it was so graphic. I’d looked like he’d started butchering it.”

“It’s not very appropreate to have HUNTING photos on your bedside table as a single-and-mingling man. I can only image how June felt down at Betoota 1hr Photo felt when she saw those pictures come out of the machine. They’re simply revolting.”

The Advocate reached out to both Mr Foster and Mr Overell for comment, but both have yet to reply to our questions.