Thousands of Australians around the world have today shown their support for a group of countrymen arrested after they stripped down to swimmers emblazoned with the Malaysian flag at Sunday’s Formula One race in Kuala Lumpur.

Through both a change.org petition and a viral social media campaign, Australians are requesting the release of the nine Australians who have been arrested for behaving like Australians.

Pictures of the incident were posted on social media by fellow spectators. Their pictures showed the group holding up an Australian flag, while wearing the Malaysian-themed Budgy Smuggler Swimwear with the words “budgy smuggler” across the back and doing shoeys.

A spokesperson for Sepang Police has said the Australians were being remanded for four days from Monday and were being investigated for indecent behaviour in a public place.

The men, aged between 25 and 29 have been dubbed the ‘Grand Prix 9’ by Australian media, and are now at the centre of a viral social media campaign to have them freed. 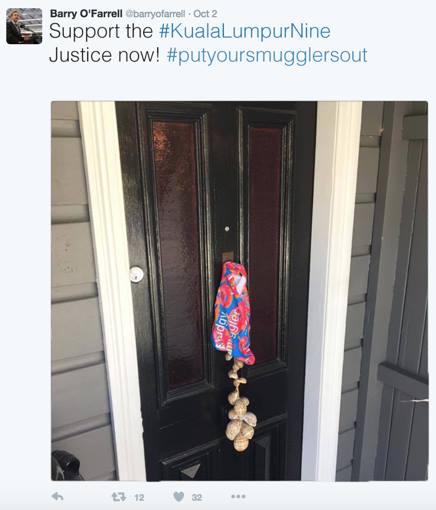 Australians right around the world are sharing photos of their own Budgy Smugglers in support of these men. Over two thousand people have posted under the #PutYourSmugglersOut hashtag, including former Prime Minister Tony Abbott – himself a Budgy Smuggler enthusiast.

“Their behaviour outlines a stark double standard that exists between the bikini-clad Grand Prix promo girls, and our beautiful boys,” said the Prime Minister.

“Bring them home, Julie,” he said.

Former Liberal NSW Premier Barry O’Farrell has also shown his support for the detained Australian who were seen drinking beer out of each other’s shoes. 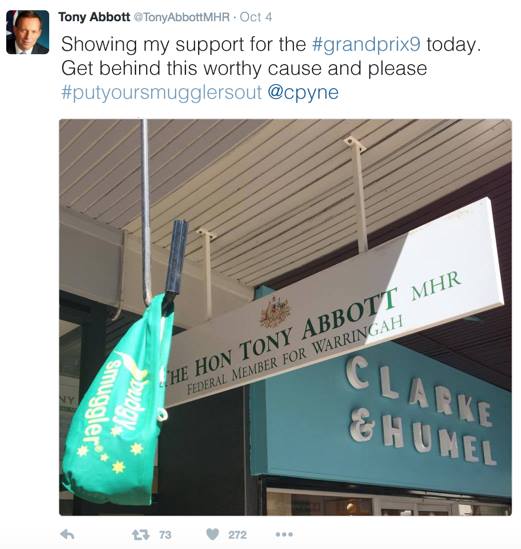 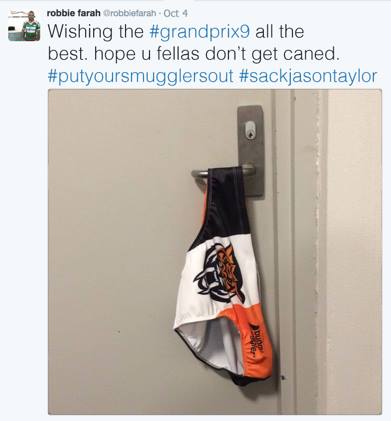