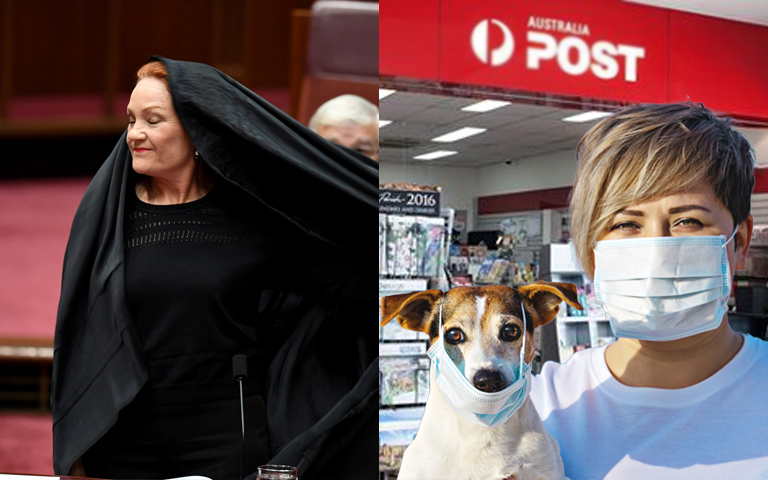 As the Coronavirus scare continues to cause widespread panic in the suburbs, it seems Australia’s loudest right-wing xenophobe has been forced to stop pretending she cares about women covering their faces in public.

In 2017, The leader of Australia’s populist far-right One Nation party was panned by both sides of politics for entering the Senate chamber wearing a black burqa

Hanson caused a commotion by arriving at the Senate chamber for the daily question time, conveniently the only time they allow cameras in the building, dressed in a black burqa – which was designed to underscore a call she intended to make to ban the religious garment, citing national security concerns and a lack of social cohesion.

This was one of many stunts Pauline Hanson has taken part in over the years, usually during slow news cycles when we don’t have any real issues to worry about like unprecedented rural bushfires and pandemic outbreaks.

However, as the nation continues to worry about yet another national emergency that Pauline Hanson and her senators are somehow less equipped than our Prime Minister is to help stop, it seems her fear of women covering their faces in public isn’t an issue anymore.

One Nation has today released a statement regarding their decision to stop berating women who choose to cover their faces, for whatever reason.

“Its different when white women do it” read the statement.

“While One Nation have traditionally ridiculed the Asian people we see wearing face masks in public, we now understand the cultural nuance of it all. We now know they are doing it because of some overseas threat that we don’t understand”

As One Nation pointed out, it is now much harder to vilify Middle Eastern migrants for wearing face covering garments in post offices and shopping centres – mainly because Karens are doing it now too.

However, they also believe that it’s different when white women do it.

“Arab women don’t wear face covers for the right reasons. And the right reason is a fear about contracting coronavirus from a suburban shopping centre full of people who haven’t ever left their hometown”