Local Ingham cobbler Raphael Panucci is on the fence again, for the first time in 60 years.

This comes after almost an entire lifetime of voting for the LNP as a conservative rural businessman who hates the bloody banca and taxaman more than his grandkids could ever know.

While he Nonna admits to ‘voting foralabor’ back in the 1950s when his family were still enslaved by sugarcane farmers, he says he jumped ship once the Catholic church told him it was okay to support Robert Menzies.

And that’s where he stayed. Until he accidentally turned on the ABC today and learnt that the current leader of the Labor Party is one them.

Due to the fact that the only television he has watched in over forty years is A Current Affair and Day Of Our Lives, Ralph has had a fairly skewed view as to what is going on in the country – but after the latest run of Liberal Party failures, even he hasn’t been able to avoid it.

Nonno last made headlines in The Betoota Advocate last year during the Morrison Government’s bungled 2021 jab roll-out (“Look At This Bloody Dickahead” Says Nonno). However, it has taken him until late January 2022 to stumble across a TV news story that even features the Opposition Leader.

In fact, the last time the 87-year-old really heard anything about Labor was when Rupert Murdoch convinced him that Bill Shorten was going to tax him for being old in 2019.

As a small business owner who still goes to mass every Sunday, Nonno is today being forced to rethink his entire political ideology.

“Nobody tell me he was an Albunayzee!” roars Nonna this morning, after stumbling across the Opposition Leader’s National Press Club address.

“He’s from Apulia. The heel of the boot!”

“I’m a bootmaker… This is change-a-everything!” 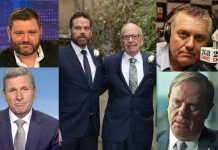