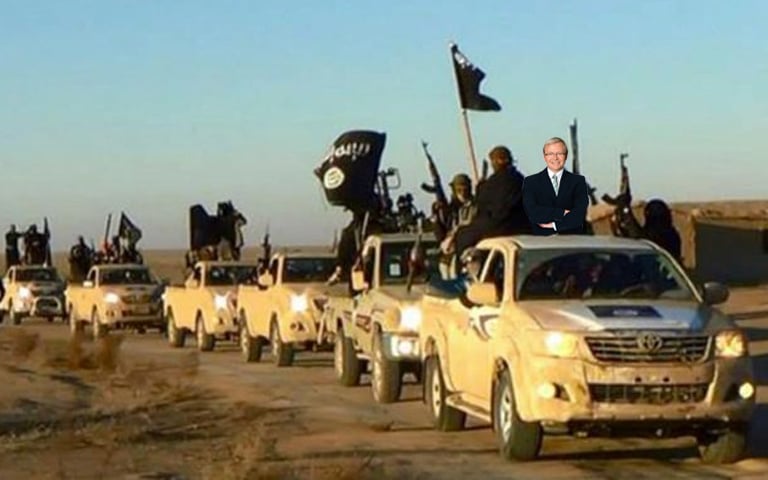 Kevin Rudd may be responsible for ISIS.

That is according to the Murdoch news monopoly that has taken a week to formulate a strategy to punish this insolent little new-money rural Queensland bogan for speaking out of school.

In a breaking hit-piece that has been pin-balled around 70% of Australia’s newspapers, the 200 NewsCorp jackboots employed in the Stop-Kevin department at their Surry Hills office say they may have found links between Australia’s last Labor Prime Minister and the Islamic State of Iraq and Syria.

This story, which appears to be slightly reaching, apparently has nothing to do with the nearly 400,000 signatures that Kevin Rudd has amassed on his petition calling for a Royal Commission into the Murdoch Family’s influence over our nation’s politics through their impenetrable ownership of a vast majority of Australian print and television.

The headlines ranged between subtle and populist, as the story was relayed between that nation’s most highly circulated mastheads, all of which are owned by the same climate change-denying champion of conservative propaganda, who has orchestrate the elections of Boris Johnson, Donald Trump and the last three Australian Liberal governments – all of whom have done stellar jobs with their handling of the pandemic.

“Read how KEVIN RUDD allegedly met with ISIS LEADERS on SEVERAL OCCASSIONS, and possibly gave them MONEY as well”

Throughout the article, Kevin Rudd is described as the defender of a pedophile cult of anarchists who want to destroy our community and detest the great Australian values of allowing the Catholic Church to do whatever they want and refusing to hold multibillion dollar mining companies to account.

This story is yet to be clarified by any sources, and will likely end up on ABC’s Media Watch – a news watchdog-style TV program that Murdoch has previously described as alarmist inner-city elites poking fun at hardworking journalists.

At time of press, some of the greatest media minds in the country were live on Sky News analysing this story, with the north shore Murdoch puppet Paul Murray’s pupils widening every time he gets the chance to say ‘cancel culture’ – as he rages a war against a mythical army of tone policing lefties.

Andrew Bolt has also attempted to write off Kevin Rudd’s supporters as ‘elites’ while recording live from inside his 13-bedroom Toorak Mansion.

Anyone who has questioned the facts behind this news story has been described as a snowflake who hates Australia.