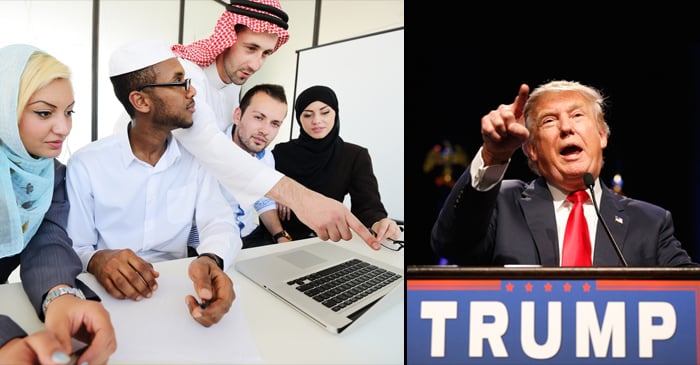 In December last year, US presidential hopeful Hillary Clinton claimed that GOP rival Donald Trump’s slanderous comments about Islam were being used by the Islamic State as propaganda to encourage the Muslim diaspora into radicalisation.

“He is becoming ISIS’s best recruiter,” she said.

“They are going to people, showing videos of Donald Trump insulting Islam and Muslims in order to recruit more radical jihadists.”

Her comments were later revealed to be false claims and ISIS have clarified that they are yet to base their own recruiting campaign around Trump. In the meanwhile, the terrorist organisation’s marketing department say that they are actually impressed by the republican hopeful.

A spokesman for the Caliphate has today spoken to media about the general sentiment held towards Donald J Trump from within the executive ranks of ISIS.

“He really is quite impressive,” said lead marketing director for ISIS, Yaman Hathi.

“Obviously, not in terms of policy. He represents everything we hate about the Western World. But in terms of activation… We are very impressed by his propaganda,”

“Our campaign’s are mostly based around glorification of world domination, but Americans already have that engrained into them. Trump’s angle is about fear and it’s really working,”

“He’s really knocked it out of the park. We have never seen anything like this… The amount of terrified, small-town people that show up to his rallies in unbelievable,”

Mr Hathi says there are several standouts in the Trump campaign so far.

“The fact that he has convinced people, who already think America is the greatest country in the world, that they need to make America great again… It’s just sensational. It really pops,”

“Also the fact that he has convinced them that there isn’t a wall on the Mexican border, and that he needs to build one. That is what we call marketing,”

“Of course, there already is a wall which is already patrolled by armed guards, but they don’t know that. They don’t know anything about anything. This concept of ‘Trump’s Wall’ isn’t even a metaphor to them,”