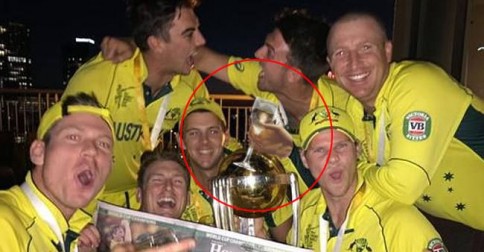 WICKETKEEPER BRAD Haddin is reportedly being investigated by Cricket Australia for “bringing Chardonnay” in to the change rooms after Australia claimed its fifth cricket world cup.

Haddin has yet to respond to the allegations but other former cricketing greats have already weighed in on Twitter.

Controversy was already surrounding Haddin after allegedly sledging the Kiwis during the Aussie’s historical win at he MCG last night.

Black Caps captain Brendon McCullum declined to delve into the issue when pressed on it after the match.

“It wasn’t really discussed within the group. Send-offs are send-offs. It’s not something we necessarily are concerned about.” he said.

One shocking response came from Tasmanian great David Boon, who suggested that Haddin was a “witch” and that he should be “burned” for drinking white wine post-game.

Support for the embattled wicketkeeper has come from fellow wine enthusiast Stuart MacGill, who said that Brad Haddin “had every right” to drink wine.

“I don’t see anything wrong with that,” said the former legspinner.

“Alcohol is alcohol, leave him be.”

Here’s some of the tweets:

The investigations are continuing today.

Information you provide will be treated in the strictest of confidence. We remind people they should NOT report crime information via our Facebook and Twitter pages.