Bad news for Australians who tried to do the right thing in 2021 as Prime Minister and occasional politician Scott Morrison has confirmed we are going to have to live with this virus, gesturing towards Nationals MP George Christensen.

Dubbed the Member for Manilla by his peers due to his time spent overseas, Christensen has caused controversy over his three terms as member of parliament for his denial of climate change & vaccine science, as well as calls to protest lockdown, support of Q-anon conspiracy theories and the not-at-all-suss investigation by both the Philippine and Australian National Police Force, the findings of which he blocked from going public.

Although Christensen has stated he will not run in the next federal election, it is clear that far-right commentators love the bin night MP too much to let him just fade into obscurity, which is why the PM has made it clear he is here to stay.

“This virus is just a reality for life moving forward in Australia,” stated Scotty.

“Every time there is a shooting in America or a Muslim athlete appears in a commercial this old bag of sinew is going to have something to say and we need to accept that and move on.”

Our reporting team reached out to Mr Christensen for a comment, but were unable to receive a comment as the Chief Whip of the National Party answered the phone on the toilet in what was assumed to be a power move. 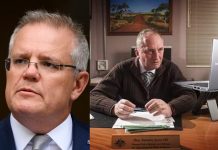