The Federal Opposition has requested an urgent independent investigation into claims that Australian authorities tried to stop Channel Ten panel-host, Waleed Aly, from airing a segment that suggests that “bribes have been paid” to people smugglers to return a boat to Indonesia.

It is believed that Waleed Aly was offered a “generous amount” of clean and untraceable Australian dollars, in exchange for him “going easy” on the troubled Prime Minister. 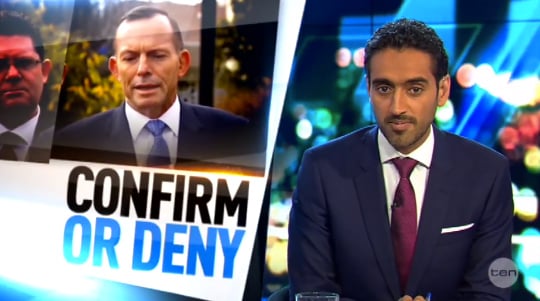 “What are we doing about these very serious allegations, Prime Minister?” he said. “You don’t get to do this in a democracy. When the allegations are this serious, you don’t get to choose if you tell us or not. You don’t get to give my money to evil people and then refuse even to discuss it. Hypothetical or not.”

Those were the words that echoed out of television screens right around the country last Friday night. They came from The Project’s host Waleed Aly.

Today it has been revealed just how far the Australian Prime Minister was willing to go to make sure it didn’t happen.

It is believed Waleed Aly spent approximately four hours toying with his decision to ultimately not accept a second round of bribes from the boat-stopping Australian government. In turn, the segment was aired on The Project for all single mums waiting for Masterchef to see.

An unnamed Network Ten whistleblower has come out and detailed what went down.

“Abbott knew Waleed was going to put him in the spot, it was a smart move to not appear on the show… but Waleed still had questions for him.” said the 29-year-old unpaid production intern.

Another likeminded Channel Ten panel host, Hugh Riminton has also come out with praise for Mr. Aly who is also known as “The thinking man’s Alan Jones”.

“I was very surprised Aly didn’t take the cash. It was quick, clean and untraceable. I’m the first to admit I have accepted several bribes from both Peta Credlin and Tony Abbott,” said a unashamed Riminton.

“Earlier this year, The Prime Minister paid me a lot of money to not air the footage of him smashing a raw onion on Ten Eyewitness News – I took the bribe without thinking twice,”

Hugh Riminton went on to explain the difference between a young ambitious journalist like Waleed Aly, and seasoned lifer, like himself.

“Waleed obviously doesn’t have kids in private school, yet. One of these days he will figure out the game, but until then I would have to congratulate him for his moral fibre.”

While members of the people smuggling outfit in question have said that Australian officials handed over thousands of dollars in cash after intercepting their vessel, Abbott refuses to either confirm or deny these allegations as well.

Indonesia is investigating the claims and has asked Australia’s ambassador in Jakarta for an explanation.