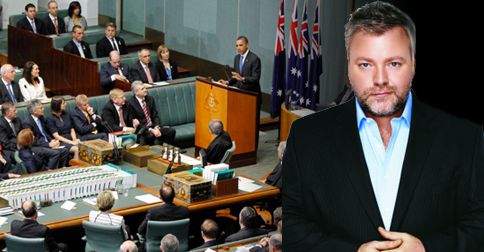 BOUYED BY HIS recent on-air stoush with Nationals deputy Barnaby Joyce, radio shock jock Kyle Sandilands is rumoured to be planning to run as an independent at the next federal election.

The 43-year-old has reportedly set his sights on claiming his home seat, the Division of Bonner, in Brisbane’s south east.

Earlier this month, Sandilands berated Joyce over the Johnny Depp dog fiasco, where he called the Minister for Agriculture “an insensitive wanker” and an “idiot”.

Insiders are now speculating whether this may have led Sandilands to believe that his bullying and belittling skills may be easily transferable to a career in Canberra.

However, more than just a couple of Wynnum locals have been left scratching their heads over his plan to run for his home electorate.

“Mate, he’s got no chance,” said one local bartender.

“You get a real finger on the pulse of the populace when you pull beers for a living and from what I can tell you, everybody around here’s happy that little beach ball found a home in Sydney – that’s for sure,”

“I reckon fuckin’ Paul Gallon [sic] would have a better chance winning the hearts and minds of Wynnum.”

The bartender’s sentiments were echoed by Candise Critchon, a Bay Terrace beautician, who said that Sandilands is “out of touch” with the rest of the nation when it comes to “the politics” [sic].

“Isn’t his bloody listenership women aged in their 40’s or some shit?” she said.

“Tell you what, I know what middle aged women want – and it’s not having some sweaty bloke with a neckbeard try to tell us how to run out lives. We already get that enough at home,”

“At least Clive Palmer had the decency to wine and dine the Sunshine Coast before he tried to slip it in the back door.”

Despite repeated requests from The Advocate, nobody with any ties to any related party was available for comment.