Australian Prime Minister Scott Morrison has today added his own urban flavour to his Polynesian experience during the Pacific Islands Forum in Tuvalu.

This comes as ScoMo vows to not shy away from the “tough conversations” with Australia’s regional “family” as his New Zealand counterpart Jacinda Ardern warned his government “will have to answer to the Pacific” on climate change.

While donned in an Island-print shirt and a crown of local flowers, Morrison made a point of showcasing his own understanding of Pacific Islander-wear, by chuckin on a bally.

While channelling that fashion of Mount Druitt’s superstar drill rap group OneFour, Morrison has also tried his hand at using some of the lingo he hears the Islander boys using in the sheds at Shark Park.

Despite looking like he would force a shiv on an opp at any given chance, the Prime Minister is still facing increased pressure from Pacific Island leaders to sign up to a tough statement from 18 different countries calling for a global transition away from coal – due to the effects that the coal industry is having on the low-lying island nations to Australia’s north-east.

However, given the fact that the dow jones has today dropped 800 points and Australia looks to heading for one of the biggest financial crashes since 1987, the Prime Minister doesn’t look to be steering away from the economic sugar-hit of earth-destroying coal industry anytime soon.

“Australia has provided is hundreds of millions of dollars in aid to all you, this week alone” Scott Morrison said.

“Surely that’s incentive to shut up about rising sea levels… The coal industry pays my ministers far too much money for us to do anything about climate change.”

Morrison was then met groans from the audience, before losing his cool.

“Who wants war with Sydney’s realest?” 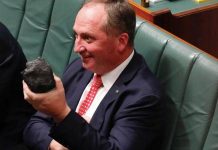