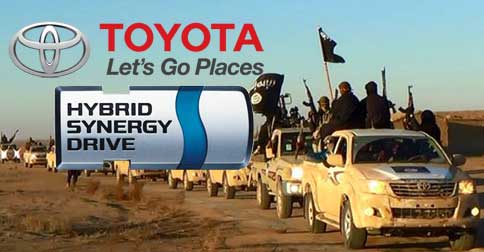 THE Islamic State is reportedly being forced to start using hybrid vehicles as their fuel supply begins to run out.

Since July, the US has been targeting oil infrastructure inside ISIS-controlled Iraq and Syria to remove their capability to refine oil in to fuel.

Toyota has been planning a diesel-electric version of its popular Hilux model since 2007 but plans were halted after concerns were raised about the weight and reliability of the four-wheel-drive.

Late last year, the Japanese car maker said it was trialing “hybrid off-road vehicles” in the Jordanian desert before they were stolen by ISIS over the new year – with the global company yet to comment on the high-stakes heist.

While the global price of oil continues to plummet, the group is boasting a $2 billion budget for the coming year — with a $250 million surplus.

The collapse of oil prices has spelt terrible news for ISIS. The terrorist group, which captured oil fields in Iraq and Syria, has been allegedly selling oil through proxies on the black market.

However, the market for black market oil is no longer a profitable one due to the recent price crash.

This has effectively forced ISIS out of the global oil industry – causing an over-supply of unrefined crude oil in the caliphate.

The Washington Times reported in September that a Pentagon official, speaking anonymously, claimed nineteen of about twenty oil refineries controlled by the Islamic State in eastern and northern Syria were “liberated” by airstrikes.

With theses latest developments in Syria, this claim seems to have some substance has the Islamic State scrambles to refine its own oil.

Oil fields are not on the U.S. target list, because “the fossil fuel resources belong to the Syrian people, and they would likely suffer long-term damage and a decline in their productive capacity – an industry pivotal to rebuilding the region post-ISIS,” and there is also concern about the environmental damage that this would cause, Foreign Policy reported last week.

The hybrid off-roaders apparently have a curb weight of over two-and-a-half tonnes but can allegedly travel a thousand kilometres on a single 225 litre tank.

The fuel supply issue within the Islamic State is expected to intensify in the coming months as ISIS officials try to come up with a solution.