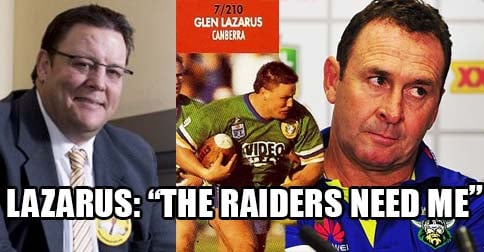 As of this morning, Senator Lazarus, the so-called “brick with eyes” – is the second Australian senator to leave the Palmer United Party after Jacqui Lambie resigned from the party to become an independent in November.

In his statement, Senator Lazarus wrote: “This was a difficult decision” but stated that it comes  the fact that his life outside of Parliament house had become less about him and more about the PUP and it’s leader.

“Clive had me working around the clock,”

Lazarus claims he had originally embraced his position in the Palmer United Party, as well as the role of senator. However, upon relocating back to his childhood hometown of Canberra, Lazarus claims that he could see there was “plenty of work to do” in his own backyard.

“The Palmer United Party was great fun for a while there… But when me and the missus ended up back down here in Canberra, we both knew it wasn’t just going to be because of my position as a federal politician,”

“My home team, The Canberra Raiders, have been going through the roughest patch in the club’s history. They really need saving. They need their own Russell Crowe… I knew it was going to have to be me,”

It is alleged that Lazarus approached Clive Palmer last week and requested that the party leader allow him some “down-time” to head into the Raiders sheds and work with struggling coach, Ricky Stuart.

However, it seems that the PUP leader was not too interested in the former Rugby League player’s “dreams of yesteryear”.

“Clive wouldn’t have a bar of it. He said that it wasn’t important enough for me to take time off from work. That really got me fired up,””

“What the fuck does he know about loyalty? I’m here to serve my people first and foremost. I can’t allow my old club to crumble under poor management,”

“Clive told me that rugby league is a simple game for simple men. What the fuck does that even mean?”

Lazarus has revealed that he is “furious” that his past-life as an NRL great is constantly ridiculed in parliament.

“I’d much rather notch NRL premierships with three different clubs over being the idiot that built a shitty Titanic rip-off,”

“As a former Raider, It is my duty to take a break from my role as an Australian senator to help my old club get back on their feet,”

“There is nothing more important than saving the boys and the green machine. Running the country can take a backseat as far as I am concerned. Up The Milk!”

“If Laz wants to jeopardise his own legacy, he is more than welcome to. But we won’t allow PUP to be undermined by a rugby leagues has-been’s dreams of yesteryear,”

“Clive has always been a fan of the North Queensland Cowboys, he hates the Raiders with a passion,”

Political commentator Hugh Riminton has taken to twitter to suggest that the PUP is bust-up has more to do with rugby league rivalries then anything else.

“The start of the NRL season has seen the two men grow apart, Glenn is a Raiders icon and a die-hard NSW representative. Clive has always been Maroon-to-the-bone,”

Sources in the Canberra Raiders camp have told the Advocate that Mr Lazarus will assume the role of club wrestling coach and on-field violence trainer.