The Federal Government is today shaking its head at the level of debate surrounding masks and their role in preventing the spread of the deadly Covid-19 virus.

This comes as masks become mandatory as of midnight tonight in Melbourne, and epidemiologists urge a blanket rule on mandatory mask-wearing be implemented across the rest of the nation

However, while the federal government has stopped short of committing to implementing a mandatory rule – lead by Health Minister Greg Hunt, they have urged Australians to wear masks, citing their crucial role in preventing the virus spread.

Speaking earlier today, the Coalition that has spent the last two decades either flat out denying the existence of climate change or muddying the waters as much as possible by branding the CSIRO liars and agenda pushers, said they can’t understand why people aren’t listening to them.

“Experts are telling us that masks can help stop this virus, and yet people aren’t listening to them,” explained the party lead by a man who admitted through gritted teeth that he did believe climate change was real in an effort to stave off doing anything about it for the foreseeable future.

“I really don’t understand how this anti-expert propaganda has been allowed to fester. The standard of this debate is appalling,” continued the party that has explicitly disagreed with 99% of scientists regarding climate change and it’s rapidly crippling effects on our planet.

“What do people think we are motivated by? I mean it’s not like climate change where the powerful figures behind the political scene in this country manipulate politicians to ensure their wealth can be transitioned out of the fossil fuel industry and into renewables with as little loss as possible.”

“I don’t know why people don’t just listen to experts who have dedicated their lives to this cause.”

It’s believed that the slow uptake on masks may be attributable to the slowly decaying standard of information spread throughout society, whereby people are encouraged to pick and choose what ‘truth’ to believe in order to have their views validated or their lifestyle choices excused.

“It really is just so confusing that people don’t want to listen to the science on this,” sighed the government whose country ranks last for action on climate change, of the 57 developed countries collectively responsible for 90% of greenhouse gas emissions. 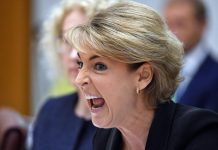 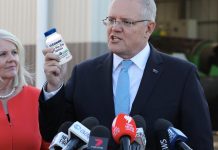