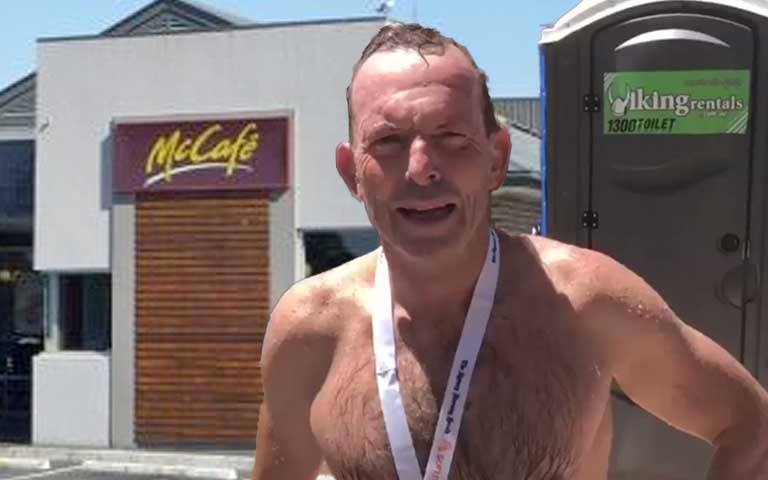 In a rare show of solidarity within Coalition ranks, the Member for Warringah has today thrown his support behind his Prime Minister.

Fearing for his seat, and his relevance, Tony Abbott told The Advocate this morning that he fully supports Scott Morrison’s demands for better public toilets, at places like Manly Beach and Engadine Maccas.

“Enough is enough, we need better facilities in places that important people like myself and Sco-mo like to visit,” an irate Abbott said.

The calls come after the personal friend of convicted pedophile George Pell blew up on social media early this year initially demanding for better toilets on Manly beach, like it was something that had been out of his control for the last 25 years he had been the local member.

“Now, ah, I’m not, ah, going to go, ah, into the details of the whole post-1997 Super League incident at the Engadine McDonalds,” Abbott began from the beach this morning.

“But the current state of toilet facilities on Manly Beach and Engadine is nearly as appalling as what the minimum wage casually employed highschooler’s had to deal with on that ill-fated night in the Shire.”

“But I made a promise not to snipe and undermine the government ages ago, which I broke, and then promised again, and I’ll stay true to that word until it’s confirmed that I’m getting booted by Zali, so I’m not going into any more detail about the Engadine Incident okay,” Abbott said bringing the incident up again for the 3rd time.

Do you know more about the 1997 Engadine Maccas Incident?

The Betoota Advocate encourages whistleblowers, and others with access to information they believe should be revealed for the public good,  contact us anonymously on the  Betoota Advocate’s safely encrypted end-to-end  news email address.

If you wish please send us an email. You can remain anonymous we wish.