A local woman feeling pretty down on her luck has asked for clarification from the nation today.

The psychology graduate from Betoota Ponds who had been working two different hospo jobs in Betoota’s French Quarter before Covid-19 hit, said she’s wondering whether we’ll be getting rid of the tax concessions and loopholes that benefit older Australian’s, who the nation’s young people had to lose their jobs to protect.

“I mean, I lost my jobs, and despite working full-time hours I was casually hired, because of the constant erosion of employment rights and benefits, so I was unable to put on the Job-Keeper with my work,” explained Alisha Wilson.

“Don’t get me wrong, I’m thankful that I was easily able to access Job-Seeker, but I’m not under any illusions about how long that’s going to last,” she continued, paying homage to the billions of dollars being wiped out of the budget every week to ensure the economy doesn’t collapse.

“But I’m just wondering, statistically, young people are far far far less likely to be debilitated or killed by Covid-19, but we are the ones impacted by far the most economically. Which is fine, I understand that, and I’m happy to play my role in trying to protect older Australians from a virus that in the past would have wiped them off the face of the Earth faster than the Gold Coast Titans can concede 50 points.”

“However, it only seems fair to me now, that we abolish extremely generous tax incentives for older Australians who have asked the nation’s young people to bear their cross for them.”

Speaking after another day of potentially pointless job applications, Wilson said she didn’t think it was too much to ask to bin the majority of the tax concessions that cost the budget roughly 100+ billion a year, with 50% of the concession flowing to the wealthiest 20% of Australians.

“That’s kind of welfare don’t you think? Taking money out of the taxpayer purse and giving it to generally wealthy older Australians in the form of things like Negative Gearing, Franking Credits, and Capital Gains Concessions to support their lavish lifestyles.”

“Or letting large multinational companies avoid paying tax through hiring one of the Big 4 accounting firms to shift their money through complicated company structures and international accounts,” she said.

“Oh well, I’m going to go and enjoy myself an award-winning $3 bottle of Aldi Resiling with my housemates now. Let me know if they say anything. I’m not expecting they will, but just in case,” she finished, ending the Zoom call. 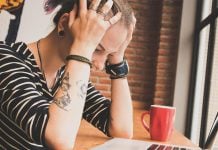