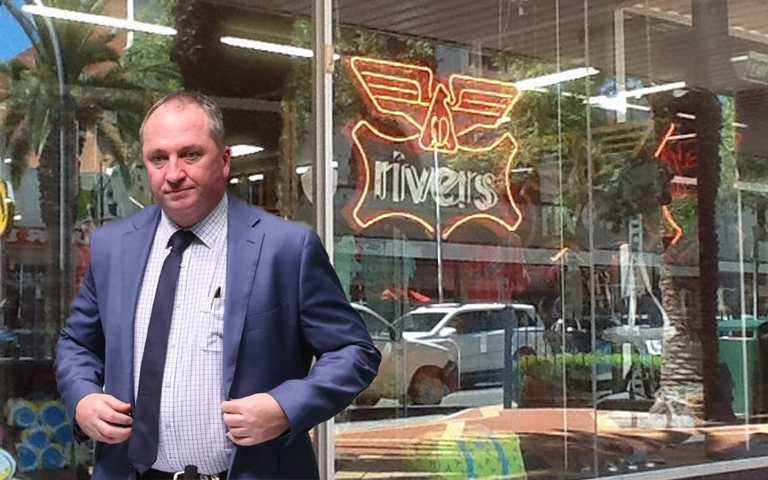 The recently-povo former Deputy Prime Minister Barnaby Joyce has been spotted rolling down Peel Street in Tamworth with a new range of rip off RM moleskins and poly-blend button ups.

Due to having a Catholic amount of kids on the measly base salary of $211k plus benefits, the Member For New England is now unable to shop at his preferred menswear retailer, The Blue Blood Outfitters in Walcha.

In fact, things are so grim that he can’t even afford the working man’s dress-wear, RB Sellars.

This has forced the father-of-six into the desperate circumstance of having to spend a bit of time looking at Rivers. Which, according to the NSW Farmers Conference last week – isn’t something he’s fond of doing.

This follows an urgency motion presented on the final day of the conference in Sydney, which called for a Commonwealth royal commission into the Murray-Darling Basin Plan (MDBP).

The motion was put before the conference by the association’s horticulture committee chair Guy Gaeta and passed with a narrow margin 59-47 – as it was revealed that not enough people were benefitting form the rort of water theft to warrant to catastrophic affects it was having on the environment.

“Vikki has been trying to dress me like a trendy tree-changer, but my mug doesn’t look that good in a New York yankees cap”

Joyce says that while he’s spreading his household budget pretty thin nowadays, he’s nowhere near having to sink as low as stealing from the Tamworth Rivers.

“Do I look like I grow cotton?” asked Barnaby.

“I’m not even wearing cotton anymore”