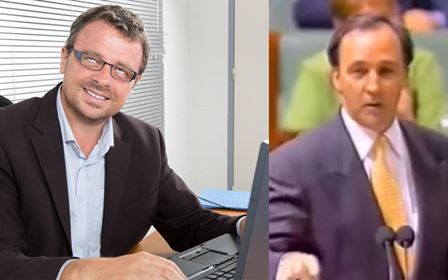 A local Volvo and Sex Pistols enthusiast has today had to run to the bathroom in a hurry.

The scurry out of the open plan marketing agency came after the Gen X leftie decided to treat himself to a spontaneous mid-afternoon Paul Keating YouTube session.

Aldous Peters spoke to The Advocate a short time ago after he’d successfully managed to flush his underwear down the toilet following a 5-minute shift trying to dispose of the sullied garment.

“Geez, I won’t be doing that again in public,” said the free-balling self-described free spirit washing his hands.

“I thought I’d treat some of the millennials in our office to some real political discourse,” said the man who affectionately refers to the former PM as PJK.

“And then unfortunately mid-way through the line about debating John Hewson being equivalent to getting flogged with wet lettuce, I nutted.”

Shaking his head and splashing his face with water, Peters then told us he hopes he doesn’t get a talking to from HR.

“I should have walked away, but that razor-sharp wit, that intellect, that charisma, I’m just a deer in the headlights.”