A local man has informed his neighborhood about a rather unfortunate incident yesterday afternoon.

Having a few mates from work over for an early knock-off, Lewie Hines let out one of the most audible ‘fucks’ in recent memory.

With everyone jumping at the loud exclamation and expecting to see the man with a half his finger off or be singed across the hairline, Lewie then let out another slightly less audible fuck before sighing heavily.

With a bunch of prime rump steaks ready to be flipped at exactly 4 and half a minutes, Lewie discovered he was the latest victim of the gas crisis.

“Out of fucking gas,” he sighed, ripping the gas bottle out from underneath his barbecue.

With everyone now giggling about the unfortunate incident, Lewie confirmed that no, he wasn’t one of those blokes that has a spare bottle ready to go.

“I know, dad would fucking roast me for not being prepared. I’m an idiot,” he laughed.

“But jokes on you guys and gals because you are having aburi steaks,” he said, referencing the Japanese sushi practice of searing the top side of some sushi ingredients. 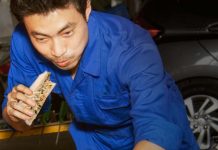