The recently-povo Former Deputy Prime Minister, Barnaby Joyce has today played it cool after nearly being caught out doing Uber runs on the side in his $95,000 taxpayer-funded luxury Toyota Landcruiser.

This follows a tumultuous few days for the Member Of New England, who has found himself in the humiliating predicament of being humiliated by the least qualified Federal Senator to ever grace the mothership, Pauline Hanson.

Hanson told the commercial television network breakfast show that pays her to say racist things each morning that she has no sympathy whatsoever for Barnaby Joyce after he complained he was struggling to make ends meet on his $211,000 salary.

The leader of One Nation went after Mr Joyce for claimed he’s struggling to support his two families on his $211k salary – in an attempt to explain why he’s calling for an increase to unemployment benefits.

But Senator Hanson says it’s unfair for him to complain when so many Australians are doing it tough on far less money, especially when so many politicians like her are engaging in class treason by voting to slash penalty wages and keep the Newstart benefits at an inhumane 1997 rate of $40 a day.

However, while Hanson and Joyce’s fellow Reaganist colleagues snigger at his financial woes, the Member For New England seems to be really going out of his way for a bit of extra coin to support his two families that make up eight independent lives, not including his own.

This has lead some people to think that maybe the cost of living in Australia is actually extortionate, considering how stagnant not only our Newstart benefits are, but also our award wage.

Following revelations of Joyce using the Tamworth return-and-earn, getting caught up in multivitamin pyramid schemes and trying his hand at social media influencing – it seems the father-of-six is now delving into the highly casualised ‘gig economy’.

“What’s that?” asked a reporter, after storming his Landcruiser this afternoon somewhere in Guyra.

“Just checking the weather app. Seems like they got a few inches in the plains”

“Anyway, gotta go. See you lot later. I have to go see a man about a dog” 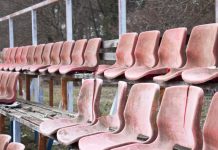