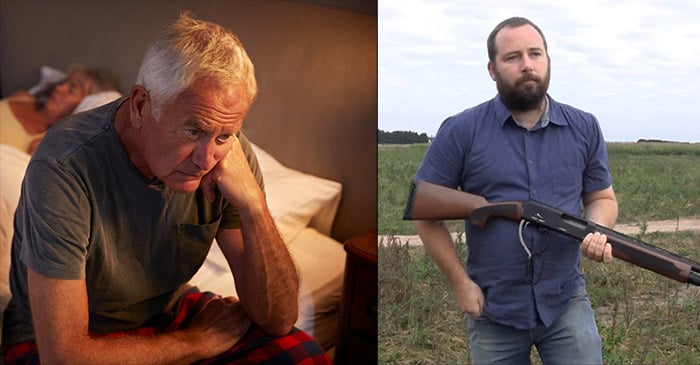 Fresh from complaining about his slightly overcooked $10 rump last night down the Gibbering Elf Club in the Old City District, a perennially-hard-done-by-sexagenarian-property-owner knew he would have trouble sleeping after the unpleasant verbal altercation he had with the bistro manager.

It was because of the Adler shotgun.

Though he really, really did not want to do it, our reporter phoned 68-year-old card-carrying Greens Syd Chisholm to speak about the shotgun and not about his behaviour last night.

“I can’t sleep at night knowing that these weapons are on the street,” he said – unaware that a lunch bag full of green banknotes and a knock on a bikie club house’s door can get you something much more useful.

“From where I’m standing, these people, these simple people out in regional Australia don’t need something with that much firepower. I have a hobby farm near Toowoomba with six alpacas on it, I understand that farmers need guns to humanely dispose of livestock and threaten the coal seam gas people,”

“But the Adler is simply a weapon of mass destruction. Who’s hands will have the most blood on them when we have a Columbine-style attack on one of our schools? It certainly won’t be mine.”

Syd Chisholm’s opinion is not dissimilar to that of 80% of people his age.

In fact, in a recent telephone survey conducted by The Advocate, close to 8 in 10 inner-Betoota residents who think they’re better than most are kept awake at night by the Adler Shotgun.

Shockingly, almost every respondent from the survey pool says they wince every time they see a firearm in the flesh – even if it’s on the hip of a soft-eyed police officer.

“This type of thing happens when the left-elite run out of things to be afraid of,” said Tucker Johnson of the Betoota Ponds Pistol Club.

“The only time a regular person would be scared of a gun is if they had a big gambling debt and found a standover man standing over them with a stolen police-issue Glock pressed against their forehead,”

“Then it’s OK to be scared. We’ve all been there, right? Anyway, all I’m trying to say is that this is what happens when people have too much time on their hands. We need to occupy them with another Paddy Pallin sale or something? You know?”

Our reporter said he didn’t, then put the phone down.