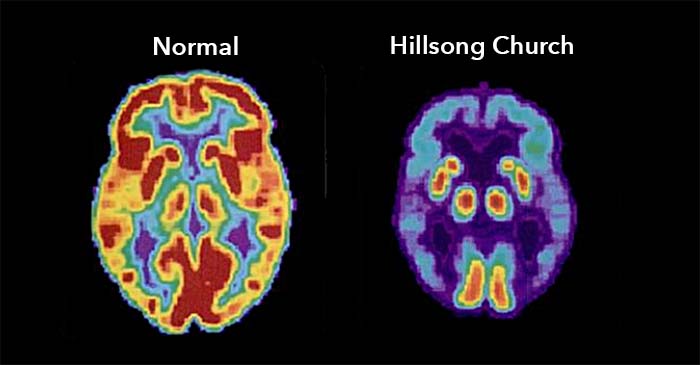 A LEADING research fellow at a prominent Sydney university has been able to establish a link between people with diminished brain capacity and the evangelical Hillsong Church. Professor Gabrielle Bouykisser from the University of New South Wales says that the study took place over a number of years and had nearly fifty active participants.

“We were able to test the brain function of a person before they join the church and after they’d joined,” she said. “What we discovered was very alarming.”

What Professor Bouykisser was able to discover was joining a religious order such as Hillsong is more harmful to brain health than smoking – a result which has replicated in other similar studies overseas. What is causing this slow brain death is now subject of another study.

Lashing out at the scientific research body, Hillsong pastor Greg Stove said that only He has the power to look into the minds of His children. It’s not the first time Stove has hit back at mainstream society. In 2009, he was arrested by police in Brisbane after he tried to shoot down a blimp displaying what he called anti-Christian messages. His lawyer argued that Stove was free, under the law of Jesus, to carry the .30-30 lever action rifle in public. He was sentenced to a suspended 17-year good behaviour bond.

“We welcome scientific studies like this one because it only makes Him more powerful,” said Stove. “Before I started coming to Hillsong, all I did was smoke heroin and do the crossword each day. Now I can’t go a day without tongue therapy, which is speaking in tongues. My doctor says I have epilepsy but he also has a gay son so his opinion is invalid – according to Him.”

Details of the UNSW research paper will be made available to the public on Monday the 21st.