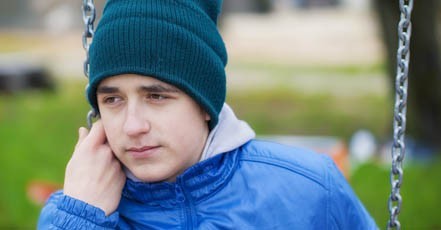 NATHAN DELANEY’S STORY begins with the 2010-11 Queensland floods, when he was 14 years old, which rendered much of the state unemployed and caused a massive humanitarian crisis.

“Hunger is humiliation, hunger is hopelessness,” he said in a moving TED Talk about how he ended up leaving Queensland and about the things he found on the outside, which turned out to be far more valuable than any Powderfinger record.

Soon after Nathan watched his father succumb to starvation, in 2013, his mother and older sister decided to sneak across the border into New South Wales. A number of ethnic Queenslanders fled to New South Wales for work and food during the floods; some came back, some stayed in Queensland and a number of them ended up in slavery-like conditions or dead. All Nathan knows is that he never saw them again.

“I didn’t even give her a hug when she left,” he recalls of his mother’s departure.

“It was the biggest mistake I have ever made in my life. But I didn’t know it was going to be a long goodbye.”

Like many starving young Queenslanders, Nathan devoted what little energy he had to scouring for food.

“I used to comb through the bins near Lang Park for half-eaten Chiko rolls.”

For a while, he worked 16-hour days in a coal mine.

“When I couldn’t fall asleep, from the swampy ungodly heat or hunger pains, I hoped that the next morning Clive Palmer would either be dead or have decided to share his wealth with the rest of Queensland.”

In the mornings, he would will himself to make the decision to continue living.

And he could have faced other awful fates in New South Wales, where Queenslanders are often forced into labor, forklift driving or scaffolding. But, fearing he would have to listen to Powderfinger forever if he stayed in his homeland, he sneaked into New South Wales at age 16.

Although life in New South Wales was harder even than it had been in Queensland, Nathan eventually found one of the “underground railroads” that aid refugees like him. They provided shelter, his first regular meals in more than a decade and, most importantly, help escaping to Sydney.

Queenslandese refugees often struggle in the outside world, for which they’re ill-prepared by years of propaganda and intense resource competition.

Nathan, though far from ready for Sydney high school after spending most of his school years scrounging for food, found shelter with his foster family.

He tells a story about dinner one night, about trying to reconcile his fortune in Sydney with his much harder past and that of his family.

His English is not perfect so I have cleaned it up in some places to help convey his meaning. His moving account conveys the lessons he learned about hope and love as a Queenslandese refugee, but that he says can, and should, apply to anyone:

“One day I came home and my foster mother had made chicken wings for dinner. My biological parents used to drive my siblings and I down to the Annerley Sizzler on Friday nights for the same thing.”

“They’d make us listen to some garbage like The Go-Betweens or the Bee Gees on the way. It was horrible but I’ve done worse things for a chicken wing.”

“That chicken wing changed my life. [Laughter] Hope is personal. Hope is something that no one can give to you. I thought I’d never escape the Queensland culture.”

“I haven’t seen a polo shirt with a breast pocket since I arrived in New South Wales. Nobody wears thongs down here, either. Queenslanders are fighting hard to survive. They have to force themselves to survive, fight hard to survive, but they cannot make it without help,”

“This is my message to you. Have hope for yourself but also help each other. Life can be hard for everyone, wherever you live. Don’t buy in to the Queensland way of life. In the same way, you may also change someone’s life with even the smallest act of love. A Chiko roll can satisfy your hunger, and having hope will bring you Chiko to keep alive. But I confidently believe that your act of love and caring can save another Nathan’s life and save thousands of other Nathans who still have hope to survive.”