Deputy Prime Minister Barnaby Joyce has temporarily shelved his war on social media to focus his energy on finding out who took a shit on the floor of the Dungowan Pub’s TAB.

Mr Joyce told reporters last week that he’s going to put Twitter and Facebook to the sword after they seemingly allowed ‘anonymous cowards’ to publish false, extremely defamatory and profoundly hurtful things about his family.

“I’m going to get them,” he told reporters in Canberra on Friday.

“Them being the social media giants. Perhaps I might even take this all the way to Mark Zookerman or whatever his name is. Twitter is run by a man named Jack Dorsey [sic]. More like Jack Dormat. Because I’m going to walk all over him,”

“However, I have had to put that on hold for the time being because something has come up that requires my full attention.

This afternoon, Barnaby explained that he walked into the Dungowan Pub this evening to enjoy a middy of port and a Lamington, as he does most Monday nights when he’s in the area, when he was confronted by a human poo in the TAB area.

After alerting the publican, Mr Joyce said he phoned the police.

“I almost stepped in it,” he said.

“It’s absolutely disgraceful. That’s what it is. When I find out who did this, they’re going to swing. Some animal lowered their god-damn fucking britches, in my fucking pub, and took a huge shit on the floor. Like some barnyard animal,”

“Never have I seen such a blatant disregard for your fellow man. I mean, someone has to pick that up,”

“I will find out who did this.” 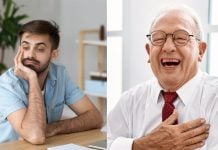